The whole world is suffering under this pandemic. Business closed down, and some industries are forced to take a break. One of the biggest industries affected is the entertainment industry, specifically film and television. In most countries that underwent a nationwide lockdown, it is not only shoots and filming that were stopped but the screening of films as well, with a lot of cinemas and theaters closing down.

Gladly, the art and entertainment industry is ever evolving and adapting. For some time, lockdown cinema was a thing—production houses are uploading their films online, free for everyone to watch for a limited time. But, it wasn’t enough. People will still find ways to go out and watch new films. The industry’s answer to new normal cinema viewing? Outdoor cinema.

It was as early as the 1900s when outdoor cinema started but it was only in 1933 when the more popular form started—the drive-in cinema, with the first one set up in New Jersey. Since then, drive-in cinema has been popular in the US and across the globe. But, like most of trends, the popularity of drive-in cinemas died down for some time—until the quarantine happened and we needed to adjust to what most call as the new normal.

Thailand, for example, is one of the first countries in Southeast Asia to build a drive-in cinema. Not only was it a well-equipped outdoor cinema, but it also has an efficient outdoor cooling system, perfect for the Southeast Asian tropical climate. The drive-in cinema opened on July 3 and could accommodate at least 80 cars, and offers free popcorn and drinks to moviegoers. 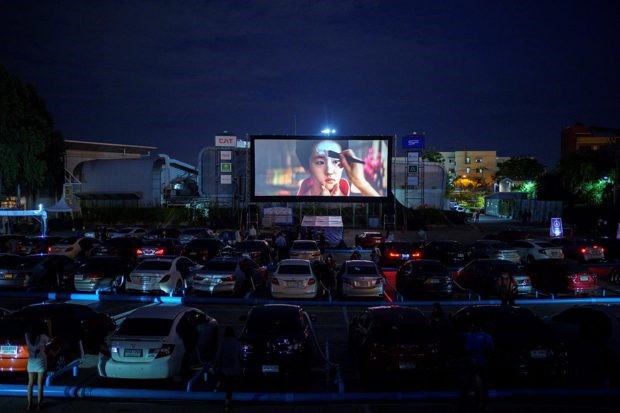 Malaysia didn’t settle for a no-movie set-up too. Just this July 17, the first drive-in cinema was launched in Ipoh, Malaysia. The drive-in cinema, called Casaurina Sini-Drive, is the country’s answer to the negative impacts of COVID-19 pandemic to its tourism.

In the Philippines, drive-in cinemas are not so new. In the recent years, Nuvali Night Sky Cinema brought drive-in cinemas back in Laguna—though it was not a regular cinema but an occasional event, happening a couple of times a year.

This July 31, after about four months of quarantine, another drive-in cinema is setting up in the Philippines. This time, it’s the Movies at Sundown at the SM City Pampanga Amphitheater, which can accommodate up to 87 cars per screening, with minimum of 2 and maximum of 4 people in a car. Tickets can be bought at www.smtickets.com at PHP 400 per person, inclusive of popcorn and drinks. The new normal cinema kickstarts by the screening the much-anticipated South Korean zombie film, Train 2 Busan: Peninsula.

This is only the start of reviving the cinema industry in the country amidst the pandemic as the officials of Cinema Exhibitors of the Philippines (CEAP) are aiming to screen local films as well to slowly rebuild the local film industry.

Movies at Sundown is scheduled every weekend, Fridays to Sundays with two screening at day, starting July 31. To get more information about it and the schedule of screening, check the Movies at Sundown page on smtickets.com.

Aside from SM Pampanga’s Movies at Sundown, another new normal cinema is emerging in Manila. This time, it’s the pop-up cinema Drive-In Manila, which claims to be the first pop up drive-in cinema in the Philippines. The drive-in cinema will be under GMG Productions and will feature both local and international films. There are still a few available details about the pop-up cinema but Drive-in Manila released a little teaser on its Instagram account, further exciting moviegoers!

To know about Drive-In Manila, you can sign up on their newsletter or email info@gmg-productions.com to get first dibs when the tickets are out.

As long as safety protocols are observed, people can resume enjoying the movie experience at theaters, this time at outdoor or drive-in cinemas. But for people who still can’t go out, video streaming apps are still here to keep everyone entertained.  So let’s hope the real normal comes back soon so we can enjoy all forms of movie entertainment, anytime, anywhere.

Born To Be Wild returns to GMA this August 2!